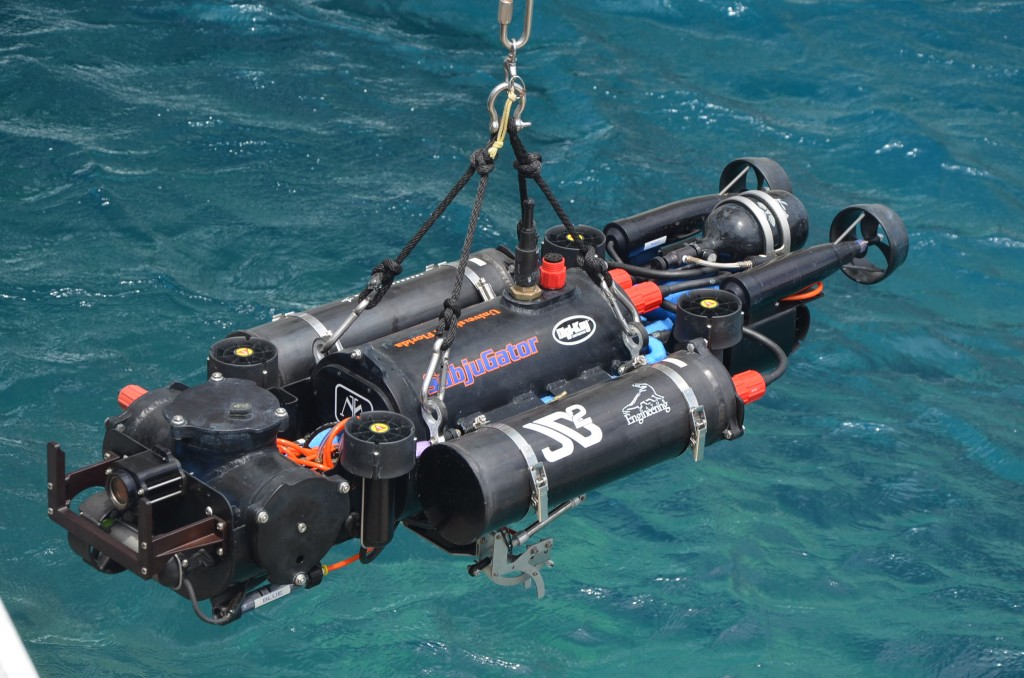 A primary objective of SubjuGator 7 is the ability to sustain operation after a failure has occurred. To facilitate this goal, the vehicle is designed so that during a failure event (e.g., mechanical or electrical), the faulted system as a whole is still capable of completing a task, or at the very least, safely returning to a recovery point to be removed from the environment. A fault tolerant design motivates a modular system structure, with each module performing specific tasks while communicating with other modules via an ethernet medium. Modules are typically encapsulated in their own pressure vessel, but there is no requirement for all modules to be isolated. Each pressure vessel is designed to meet the desired shallow water depth rating of 150 feet(~45 meters). To achieve this constraint, all pressure vessels in the current conguration are manufactured from 6061-T6 aluminum alloy which is hard-anodized for electrical insulation and corrosion resistance. Interconnections between modules are made using wet-mate-able connectors, allowing for easy addition or removal in the work environment.

To incorporate the different modules into a suitable AUV platform, a 6061-T6 aluminum bottom hull was designed and manufactured. It is split into three folding weldments for easy access to the main pressure vessel or shipping, and acts to both streamline the underside of the AUV, as well as protect it from collision.

Machine vision is incorporated into the AUV through the use of independently housed IDS uEye machine vision cameras. The decision to design a separate pressure vessel for each camera is beneficial since both the number and location of cameras is freely adaptable up to the limit of the number of USB connections exposed by the main hull.

The ability to track a acoustic source in the water is encapsulated into the passive sonar pressure vessel. Also included in the system design is the capabilities to utilize multiple pneumatic driven actuators. The currently integrated actuators include a dropper mechanism, a projectile shooting mechanism, and two grabbing manipulators.

The primary computer performs environment sensing and mission level tasks. It also allows for the connectivity of USB peripherals, such as cameras and specialized data acquisition devices.

The navigation computer consists of the following major components:

The components are combined on a custom printed circuit board (PCB) with a small form factor of 3″x2.5″ and weigh-ing less than 2 ounces excluding the GPS antenna. Despite its compact size, the board exposes enough processing power and sensor inputs to allow for accurate navigation of the AUV.

SubjuGator 7’s software stack is built on the Robot Operating System (ROS) Fuerte. ROS is an open source framework that combines many libraries, simulators, and algorithms useful for robots, and defines a simple publish/subscribe communication framework to allow for easy interoperation. By porting our existing algorithms to ROS, we gained access to its vehicle-agnostic logging, visualization, state machine, and debugging tools. Similarly, we strived to keep our in-house algorithms as general as possible, and through ROS, were able to use several SubjuGator algorithms on PropaGator, our univerity’s entry into the RoboBoat competition. After RoboSub 2013, we intend to contribute our repositories to the greater ROS community in hopes that even more projects will make use of them.

Key components of SubjuGator 7 software include:

For additional information about SubjuGator 7, please see our latest AUVSI Publication, or the publications listed above.